For many of us, the COVID-19 pandemic has resulted in a sudden shift to all things digital.  From ordering groceries to doing schoolwork — to even activities like yoga classes or music lessons — more of our world than ever is digitally based. So how did this impact Google’s results given that it’s a company that was essentially born digital?

As Google’s CEO Sundar Pichai indicated on the recent earnings call, Q1 was essentially a tale of two quarters. After reporting strong growth in January and February, the company indicated a dramatic slowdown in its advertising business in March. Specifically, Search was declining on a year-over-year basis at a “mid-teens percentage” at the end of March. The overall result was a growth of 13% for the quarter, which is down from Q4’s growth rate of 17%.

YouTube continued to grow much faster than Search, which was consistent with last quarter’s expanded disclosure. YouTube growth was 33% while paid search growth was 9%.

Continuing with a trend in the last several quarters, slowing growth in Google’s core search advertising business indicates that others are taking share — specifically Facebook and Amazon, which reported advertising Q1 growth rates of 17% and 44%, respectively.

One significant change that Google announced in April and mentioned on the earnings call was the addition of organic listings to Google Shopping. The point was made that Google can be most helpful only if it has increased “comprehensiveness” of products available for sale. Sundar Pichai, Google’s CEO, talked about how when the organic experience is improved it enhances the entire ecosystem, including ads.

For those not familiar with the new organic shopping listings, here is an example: 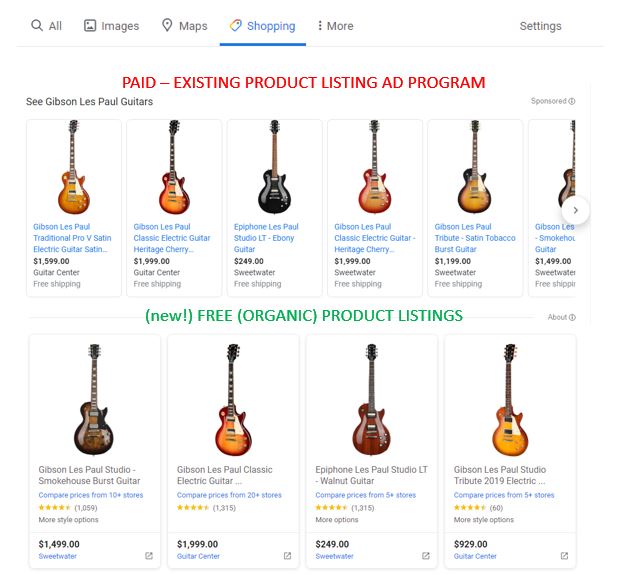 We have a more complete breakdown of these changes on our blog here. Clearly this focus on “comprehensiveness” in Google Shopping is a nod to the success of Amazon and its vast selection. While it’s clear that retailers are benefiting from additional free traffic, it isn’t clear to what extent the selection has increased and, more importantly, what impact that has on the consumer experience.

For example, if I search for a product, it doesn’t matter to me if there are 15,000 results instead of 10,000, as long as all the variations were available to start with. We believe this is really the first of many steps Google will take to improve Shopping, so stay tuned.

Clearly Google is an integral part of most people’s digital lives and engagement rose significantly as the pandemic took hold. The question is how much of that engagement remains of a commercial nature (e.g., “new running shoes”) versus health or other types of queries (e.g., “covid-19 stats”). Either way, we expect them to serve up results that are both helpful and comprehensive.

How to Use Automation and Smart Bidding for Google Success