Understanding and Unlocking the Potential of Voice Commerce

Both evolution and innovation tend to happen within the bounds of the adjacent possible – this is the concept underpinning Steven Johnsons 2011 book ‘Where Good Ideas Come From.” In simple terms, it’s the idea that if YouTube had been launched in the 1990s, it would have flopped, not because it wasn’t a good idea, but because neither the fast internet connections nor the software required to view videos was available then. The conditions weren’t right for the innovation. In many ways, the same is so for voice technology.

Many of us can remember the basic (and infuriating) say yes / no voice technology of the late 90s used by gas and electric companies, or in my case, the arduous task of attempting to discern the screening times at my local odeon “Jumanji” “Did you say Jeepers Creepers” “What? No!” In the same way that YouTube needed to wait for faster internet, voice technology was really lying in wait for the Internet of Things to emerge and consumer expectation to have information at our fingertips.

Voice-activated devices such as Amazon Alexa and Google Home, along with the rise of voice assistants such as Siri, Cortana and Bixby, are all now increasingly part of many people’s every day internet experiences. By 2020, it’s expected there will be more than 75 million US smart speaker users and it’s a trend we’re seeing this side of the pond too. Already 2% of all UK consumers are using voice controlled devices for online shopping and a tenth of households have access to voice technology devices.

But what does this all mean for the retail industry? And how should retailers be incorporating voice technology into their strategy? We decided to investigate the scale of the opportunity in our latest report with Internet Retailing, here’s a snapshot of what to expect.

The Internet of Things

Firstly, we can’t underestimate the significance in the Internet of Things in enabling voice activation to flourish. While Apple was the first tech company to truly embed voice recognition into its devices as far back as 2010 in the iPhone, it hasn’t been until the idea of web-enabled lighting, doorbells, home security systems and heating controllers such as Nest caught on that voice devices suddenly make a whole lot more sense.

And all this has been enabled by better wifi and mobile phone network connectivity – as well as commoditising of broadband and mobile phone access pricing – which has allowed for the cost-effective deployment of the connection of rudimentary household objects such as light bulbs, doorbells and more.

Where telling your speaker to “play something romantic” is nifty, getting it to also turn the lights down at the same time is even better. Controlling the heating, too, is yet more affecting. These practical applications of voice control are what have made voice assistant devices something that have caught the popular imagination – and seen sales of these devices in the millions in the UK market alone

The Size of the Opportunity

Revenue generated by the Amazon Echo and Amazon Alexa services could exceed £8.37 billion ($11 billion) by 2020. Early predictions forecast that £3.04 billion ($4 billion) of that would
come from the sales of the Echo device itself (including the Tap and Dot), while the other £5.33 billion ($7 billion) would come from all the commerce transactions derived from those devices to Amazon.com.

Amazon’s Echo voice-activated technology is currently the dominant player in voice commerce, with a clear lead (8%) of UK household adoption in comparison to the use of (2%) smart-speaker Google’s Home device. Some 45% of UK grocery shoppers are already moving from brick-and-mortar stores to online, the majority of which heading to Amazon Fresh via Amazon’s Echo voice technology

As if retailers don’t have enough platform challenges on their hands with in-store, online, mobile, marketplaces and social media as places to get their goods in front of their customers, now they are having to deal with yet another interface: voice. Whilst e-commerce on voice devices is still in its infancy, the opportunity is clearly massive. Some of the clearest applications for voice include re-ordering, tracking orders and re-arranging orders and setting up returns.

Grocery and takeaway food ordering are two of the biggest early adopters of voice commerce, since they lend themselves to re-ordering by voice alone, although there is less than adequate ability to choose product size of much in the way of variation of the order without resorting to traditional e-commerce tools such as a laptop or a mobile.

Voice will have a similar impact: it will become one of the ways in which parts of the purchase journey are made. It may be the platform where the order is placed; it may be where reviews are sought; it may be the place to check the weather and buy a bus ticket to go to the shops. The crucial thing is that voice is now part of the ‘commerce’ journey and needs to be factored in to any omni-channel strategy

Where to focus your efforts?

For starters, if you are a consumer goods retailer, we suggest you should focus your voice commerce offering on products that are most likely to be shopped through this channel: think repeat, low price point items. You must ensure products are easy to find.

Research shows that 70% of customers know the exact product they are seeking to buy. One way you can increase the likelihood of your products being ‘found’ is to tailor search terms to ensure distinctiveness against competitors, such as ‘sensitive toothpaste.’ To drive incremental spend, think about capitalising on consumers’ spontaneous or ‘distressed’ purchases. Inspiring a new recipe, for example, could encourage additional and higher price point purchases.

Maintaining Amazon’s Choice status will be crucial for any retailers looking to succeed in the Voice game. Amazon will recommend ‘choice’ products when customers request a generic item or a specific brand name isn’t known, such as ‘shampoo’. As consumers have a high propensity (85%) to purchase Amazon’s recommended product, achieving ‘choice’ status can potentially
triple sales volume, says OC&C.

For many, voice technology and commerce is the stuff of the future – but the future may be closer than you think. We have this functionality now, many of us are using it with a further entire generation of kids growing up thinking it normal to talk to the internet. (It would have been the stuff of Sci-Fi films in our youth!) And if the rapid rate of adoption is anything to go by, voice commerce is set to be an integral channel for retailers and one you can’t afford to be complacent about.

This is a snapshot of what’s covered in our report with Internet Retailing, we deep-dive into: 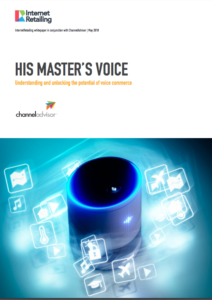 Understanding and Unlocking the Potential of Voice Commerce 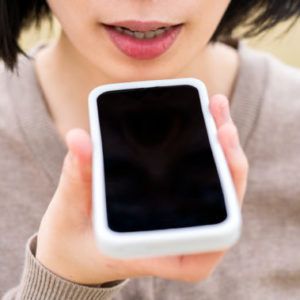 Sponsored Report by Internet Retailing Your customers are talking to you; but are you listening? Voice Comme...