Playing it Back: Gaming for Charity

Here at ChannelAdvisor we’ve been proud to offer employees an annual “give back day” – time to devote to a cause close to their heart. Over the years we’ve seen everything from scaling buildings to packing school supplies, but this year, we witnessed a new one – gaming for charity! Kat Welsford, who is a Digital Marketing Campaign Analyst in our London office, found a unique way to spend her give back day:

Compete in the UK’s largest Charity PUBG competition – that’s PlayerUnknown’s Battlegrounds for those of you non-gamers, an online multiplayer battle royale game (similar to Fortnite but definitely not for kids!). When you start play, you can choose where to be dropped out of a plane, from then on it’s up to you to scrounge for weapons, ammo, and armor in abandoned houses — your mission is to stay alive!

Alongside 100 other game devs representing 25 teams, the competition was designed to raise money for the charity SpecialEffect. This unique charity helps severely disabled people to use computers with whichever parts of their body they can, enabling vital inclusion. Many of these people want to play video games and SpecialEffect specialise in Eye Control Technology for those paralysed & unable to speak. Through eye-movement alone, SpecialEffect enables people to communicate.

The entire competition was live streamed at Twitch TV, and viewers were encouraged to donate generously, alongside fundraising efforts by all the teams involved via the Just Giving page. At last count, the event managed to raise an incredible £10,436 pounds!

Team Flow were on fine form! For the team makeup alongside Kat we had WolfY (Ranked in the top 1% PUBG players – so no pressure!), PhantomCore (who had bought the game the day before) and the Team Lead – Flowdriver (who is a console gamer through and through). To be honest, this was a bit of a ragtag team!

During the 2nd game they tried a new tactic – dropping into 4 different locations. A few seconds in and crisis! Two players dropped from the game! Luckily they were able to re-spawn in, and got to 15th! A crazy strategy but it worked (somewhat). With Kat dying to the blue zone (an area where you lose health), it was a uneventful map.

During the 3rd & 4th game, they managed to place 9th and 12th respectively, leaving their final total on 14th!

However the fundraising was not over…. As Steel Media were crowned the champions, a bonus game was announced – No guns, only frying pans and crossbows.

With Kat armed only with a first aid kit and a prayer, she valiantly fought….. and then fell! Just as she was being stalked around the house by an assailant, she took her last breath as they hit £10K money!

This was a great example of a colleague thinking outside the box to support a charity they really believe in. We can’t wait to see more Give Back Days and all the wonderful and wacky ideas to raise money! 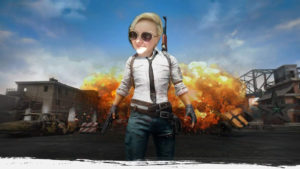