The Feed Doctor’s Catalyst After-Action Report, or “Catalyst: I Love You Man!”

I just flew back from Las Vegas, and boy are my arms tired…because I spent the flight typing up this blog post. *Rim Shot*

But the truth is that I had such an experience at Catalyst, and learned so much from interacting with our attendees, that I just couldn’t wait to talk about it. During the two-and-a-half days of the conference, I spoke with over two dozen attendees, listened to over a dozen presentations, and lost more than…well, you get the idea. And while those numbers are just a fraction of the total attendees and talks, it’s overwhelming for us engineers to be that social.

Before I go further, I just want to say that my workload was a cakewalk compared with what the rest of the ChannelAdvisor Catalyst Crew handled. The Marketing team in particular deserve a special recognition, of course (they’re also editing this post…), but everyone there put in an almost superhuman effort.

Though the biggest thanks go to YOU, our attendees. I’ve been to every US event so far (I was talking about this with Marshall Smith: he calculates he’s been to at least 15, including some in the UK), and I love seeing long-time customers coming back each year, and also seeing how many new faces we add each year. Both of these things—loyalty and growth—make me proud to work at ChannelAdvisor.

Not everything is sunshine and roses, of course. Almost everybody at Catalyst has some kind of business challenge he’s trying to solve, and our job is to help him do that. I made it my mission to try to help everyone I spoke to solve at least one problem, even if all I could do was point out somebody else who was the expert on that problem. I also made it a point to ask if there was anything about our software that we could change to help make their lives easier.  And, of course, I had the opportunity to help quite a few folks write some business rules. I’ll write about one of those in the near future.

Once again, thanks to all who attended. To those I met and spoke with, it was certainly a pleasure. Come back and see us again next year!

Blog post by Anthony Alford, a.k.a. The Feed Doctor

[Forrester Report] Must Have E-commerce Features 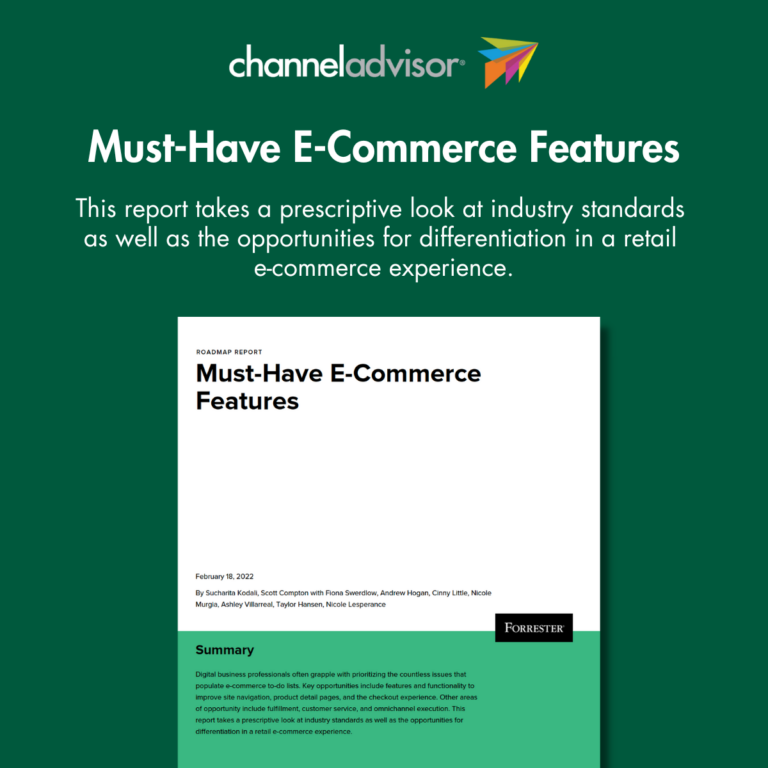 This Forrester report details the customer-centric tactics that top online brands like Nike, Etsy, Ulta and Am...